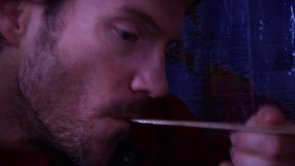 RUN TIME 5:00
Six weeks from today, all power is gone – Jack (Jerry Broome) and Sarah huddle together against the elements and the world outside.
Created for the 2007 Film Racing Grand Prix. Each team was given the same surprise theme (the future) and required prop (a flashlight).

An American actor. Trained with William Esper in New York. Starred in the short films "Sixty Cups of Coffee" and "The Water's Edge," as well as the 2008 horror movie "Death on Demand." Many recurring roles on One Life To Live and The Young and the Restless. ACTORS THEME "Men who con the system"